For a strong, free, righteous and prosperous Britain

What is Direct Democracy?

Direct Democracy is a system of legislation in which the electorate votes directly for the laws they want rather than voting for representatives to make these decisions on their behalf.

So, in a Direct Democracy will the people vote on every law?

No - for two reasons:

1. In the same way that a boss won't make decisions on everything himself but will delegate low-level decision-making to his subordinates, in a direct democracy most people won't bother to vote on minor issues but will leave these to their servants in Westminster.

2. There are some things that can never be put to the people:

a) Decisions that must be made in haste and which affect national security and which rely on militarily sensitive information that it is not immediately safe to share with the public.

b) We have certain inalienable rights and liberties - such as the right not to be dispossed of our hard-earned wealth, or the rights to freedom of speech and liberty of conscience - that the people have no authority to infringe. Otherwise you risk a scenario in which "two wolves and a sheep vote on who to eat for dinner".

How can the people know what their rights and liberties are?

Our ancient rights and liberties are safeguarded in our nation's Constitution. The problem is that few - even constitutional experts - are easily able to lay their hand on all the documents that describe these rights. Britain therefore needs a new Bill of Rights - a single document that everyone may access easily and which codifies in perpetuity the rights and liberties of every free British citizen and resident; rights that no-one under any circumstances may ever take away.

Because such a document is a necessary pre-requisite ahead of our current failed system of Representative Democracy being replaced with a system of Direct Democrcay, 5 Star have begun work on producing such a document.

How will the New Bill of Rights be created?

In a country whose Constitution promotes and defends the greatest personal liberties enjoyed anywhere in the world, a document of such importance as a New Bill of Rights could never merely be the product of a few modern people's minds. For such a document to carry any authority it would need to draw directly from the historic Acts and Declarations in which these liberties were first codified.

5 Star's process of creating a New Bill of Rights is therefore as follows:

New Bill of Rights - follow our progress so far

All stages of this process will remain visible so that collaborators and critics of our methods will have the opportunity to propose wording that is perhaps even more faithful to the spirit and intention of the original creators than what we ourselves produce "in-house", as it were.

Once the work is deemed to be complete and judged adequately to safeguard all the rights and liberties that British citizens instinctively know that they and their descendants ought always to retain in perpetuity, our first elected Member of Parliament will put a Private Member's Bill to the House of Commons.

When this bill is initially rejected by the House, 5 Star will continue to campaign to secure the British public's support for the Bill, until either a) the House capitulates, or b) the British people lose patience with Parliament and come to understand that their only reliable means of maintaining sovereignty and preserving their liberties is to elect a House full of Direct Democracy candidates that do not answer to party, to donors, to whips, or to vested interests, but are instead controlled directly and contractually by their electorates.

Why do we need Direct Democracy?

Are you not fed up of our political class making bad decisions on our behalf and behaving as though they're our masters instead of our servants?

Well, you're not alone. Prospective MPs feign interest in what their electorate wants during the few weeks of a General Election campaign. But, once elected, they have no further interest in the people's will. Their vote-farming phase is of course complete once elected, so instead, as soon as they're installed in office they immediately turn their attention towards appeasing those who hold sway over their political careers: their party leadership, whips and donors.

Electoral pledges are instantly dropped, having already fulfilled the purpose for which they were conceived: to con you into giving them the power they covet.

The consequence of this is that Parliament no longer serves the interests of the British people; it serves the narrow interest of a small élite.

The simple truth of the matter is that politicians have learned to manipulate the system in order to hijack our democracy for their own ends. They have usurped the power of the people. Constitutionally, they have no power except what we lend to them to exercise in their capacity as our servants, and insofar as they are obedient to the democratic will of the people. And if they're not seeking and delivering the will of the people, they have no moral right to retain their office.

That's not democracy. It's a very poorly disguised tyranny. And it needs to end very soon.

Isn't there another solution?

What are the alternatives? A plethora of new minor political parties, all competing hopelessly against a system it could never possibly hope to overcome - as long as it plays by the same rules that have led us to where we are now?

A change from first-past-the-post to a more proportional form of representation in which a new, initially honest little party gains a place in an indecisive coalition government, until its members soon get corrupted by the same temptations that have already killed Representative Democracy?

No, none of these "solutions" will fix anything for more than a few years. Any system of electing people to make decisions for us will eventually lead to exactly where we are now: a corrupt élite that has forgotten the people it is supposed to serve and that instead looks out for its own interest and how, therefore, it may please those it sees as key to its self-serving enrichment.

A thousand little parties all pushing for a restoration of some kind of genuine democracy in Britain, or a return to the bygone values of the past, will never make the slightest bit of difference, no matter how much of your hard-earned income you donate to their causes. They will offer nothing more than some short-lived encouragement that reminds you that there are still some decent, like-minded people in our nation who are willing to fight for what's right, even if they are going to war against political tanks with their pea-shooters.

In a first-past-the-post electoral system, the sensible British public will continue to elect one of the two major parties to government, because they know that however useless the other main party is, they're not quite as useless as the one they elect. They go on electing what in their minds is the least worst option instead of the candidates that they actually want - independent public servants who don't care about the demands of donors or threats from whips, but who answer only to their electorate.

So, the only solution to Britain's political crisis is if we can show the nation another way. A way in which elected representatives are in no uncertain terms, servants. A way in which any hint of a servant getting delusions of grandeur and acting like a master can immediately be reined in and that servant can be replaced. A way in which minor decisions can regularly be delegated to our political servants, but where Westminster will never have the power to damage our nation's interest or change our national character and where we are powerless to prevent this.

And the only solution that achieves this is Direct Democracy.

Help us get our first MP elected and let's show the electorate how to embrace an incredible future and a strong, free, righteous and prosperous Britain.

"If the people are not utterly degraded, although individually they may be worse judges than those who have special knowledge, as a body they are as good or better… The many are more incorruptible than the few." Aristotle, 350 BC.

Our Plan for Direct Democracy 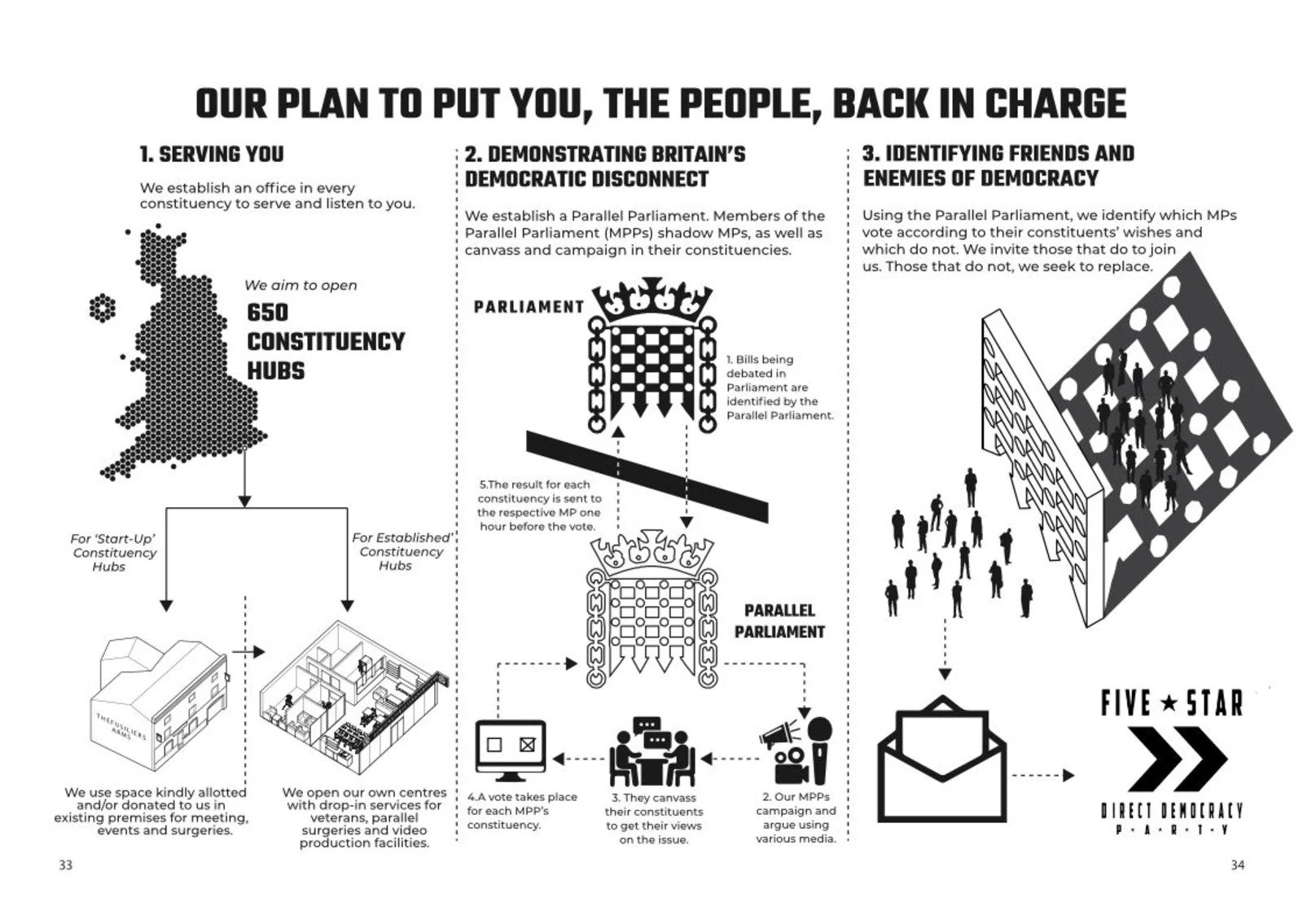