Welcome! We're an apolitical, international organisation of people dedicated to replacing the failed system of so-called "representative" democracy - a system that ignores the will of the people and transfers nations' wealth to a privileged few - with a system of genuine democracy, direct democracy, in which the sovereignty and control of a country's future is transferred to the people, where it belongs.

How to Join the Fight

You don't need to wait for the next election. You can begin the process of becoming the government today, if your desire is genuine and you're sufficiently motivated.

We Need to Change Politics for Good

Western democracies only pretend to be democracies. We are told that because we get to choose our representatives this means that anything they decide for us once they have been elected, must be democratic. But the reality is different: politicians only feign an interest in what we want for the few weeks during the run-up to an election. However, once in office they ignore us and instead take their orders from vested interests.

While our purpose is to bring about Direct Democracy in western "democracies", our motivation to effect this change is our love for freedom and fairness and our unwillingness to do nothing while a corrupt political class abuses its position of trust to enrich their cronies at the expense of national prosperity, security and heritage.

What We Want - Our Five "Stars"

5 Star believes that the following issues are close to the heart of every responsible citizen and we are confident that once effected, Direct Democracy will bring about the changes our democracies need - primarily in the following areas:

We seek to uphold and promote knowledge of national constitutions, and wish to work with other organisations committed to this important work. Democracy Defined is one such group with interest in the UK. Download, print and share their important recent leaflet on why trial by jury is so important to democracy in the UK, and should be equally important to any Common Law jurisdiction worldwide👇

I agree with your message. What can I do to help?

First off, we're not actually interested in party politics. So, you don't need to join any particular political party or leave your current party (if you have one) - unless you decide to stand for election and don't want to stand as an Independent.

Technically, we're committed to bringing party politics to an end, ultimately. But in the meantime, activists may decide to use existing political parties as efficient vehicles for getting themselves elected.

We Need to Start Winning Elections

We are confident that once the people see how DD operates in the first constituencies where it's implemented and how it shifts power from our largely despised political class to the people, neighbouring constituencies are going to want DD too. And it's going to spread like wildfire until a majority of government are independent DD candidates and we have a sufficient majority to change the law and implement DD in perpetuity - like in Switzerland! 🇨🇭

So, one of the best things you can do is to either help us get a DD candidate elected either at local council or national level - either by standing yourself or identifying someone locally who has the right qualities, and persuading them to stand; or by lobbying your local senator, Member of Congress or Parliament, to implement a Direct Democracy voting system within their constituency.

Could you Stand for Election?

Are you ready to be a champion of the people? Can you get yourself selected as the candidate of a political party that's likely to win in the area where you live? Can you learn to speak the "language" of this party and resonate with its electorate? The particular policy platform that whichever party you stand for asks you to stand on, is almost irrelevant - provide it doesn't grate with your conscience. Once elected, you'll hand over power to your electorate and ensure the people, not the party leaders or vested interests, control you.

How We Start the Revolution

Option 2 - Get Yourself Elected

This option is likely only viable if you have not previously stood as a candidate for a minor party.

What if I get elected and my conscience ever compels me to contradict my electorate?

That's incredibly unlikely to happen, because in spite of anti-democratic, condescending, mainstream propaganda, while the public are not all saints, they're infinitely more moral, sensible and socially and fiscally responsible than our wayward political class.

But in the extremely unlikely event that this ever happens, you'll need to make a public statement that you've encountered a life-and-death issue so important to you that it trumps your belief in democracy, and that your final act as an elected representative is going to be to vote against the people and according to your conscience and that you fully expect to be recalled by your electorate.

You'll probably lose your seat, but if you've got an absolutely compelling and noble reason for going against the people, you might have earned the people's respect and they might hang onto you.

I have no experience. How can I get elected?

You don't need experience. Required qualifications are only the following:

If you hold these qualification, you are ready to get started. You'll need to create a new branch or chapter so you can meet together regularly with people of like-mind, and benefit from the wider experience, knowledge and wisdom of the members of your ever-growing local group. You'll need to ask for their support in canvassing, delivering leaflets, manning action days in your local city, towns and villages, convincing local land owners to display your Correx boards, and planning and executing useful and attention-grabbing actions to arrest the interest of local media.

So, if you've got the confidence, the passion, and the commitment to do all of this, and you don't have too distasteful an assortment of skeletons in your closet, then nothing should hold you back. You have the means.

Indeed, once you've seen the light, once you've identified the simple fact that DD is the only political means to safeguard all that is valuable in your nation, if you can feasibly carve a few hours out of your busy schedule each week, than arguably, you don't really have a choice in the matter: it's your duty to act, and to not delay.

Okay, so if I stand as a candidate and succeed, how does that help the national mission? How do we become the government?

As you do what you do in your constituency, you will inevitably meet good people in neighbouring constituencies who respect what you're doing and will want to be a part of it. You need to help us identify good candidates in local constituencies who you can guide to replicate your work in their constituencies and get themselves elected to government.

Similarly, others around the country will be following a similar path. Look at this graphic for a national plan to be executed in the UK 👇. The DD candidate's work of engaging the people and handing them sovereignty will convince respective electorates around the country that a DD candidate should replace the current incumbent at the next election - if he or she is not themselves willing to embrace Direct Democracy.

We want all clear thinking, non-elitists to promote Direct Democracy. Again, we don't need you to leave your current party, if you have one. And you don't need to join a party either, in order to promote DD. If you believe in DD, want to help us spread the message - either as a non-activist who is simply willing to answer the odd question from intelligent people you meet, or as an activist or candidate - then the best place to start is by getting the D's.

By wearing the double chevron ("the D's") you show solidarity with all fellow DD advocates around the world. We wear the D's in white on black, or in black on white. We don't use any colours (except reflective metallics) because colours are associated with party politics. While debates and arguments are always conducted in shades of grey, at the end of the day, DD always condenses down to binary choices, yes or no, black or white.

We don't sell merchandise and there's nothing 5 Star does as an organisation that makes profit. We're only about spreading the word and getting truly independent candidates elected. So, we encourage you to order your own branded gear. Here's an example 👇 that's all ready to go, but you can get something much cheaper if you upload your own graphic of the D's in high resolution for a printer.

Best to right click the button 👆 and choose "Save link as..."

To analyse the population demographics of areas within the United Kingdom by geographic region, use this link to access mapping on which the last national census information has been overlaid: census data. Sick of the corruption in our representative democracies? You are not alone. The 2008 crash still badly affects us today and was largely caused by big banking houses packaging rotten mortgages into financial “products”. This industrial-level scam was aided by “respected” rating agencies and the “mainstream” media, both dependent upon the bank scammers for revenue. Even worse, politicians also depended on the too-big-to-fail banksters for their “contributions” (pay-offs), so we have had the pockets of our grandchildren dipped into to keep the bonuses of the high-rollers flowing - as is their right, apparently. Education – Blair might as well have said “Indoctrination, indoctrination, indoctrination” – as that is what we seem to be getting. From pre-school to post-grad, the system appears to be steered by educators and profs with a woke agenda and a seeming hatred of our history and our ancestors. Their aim is control, by undermining the family and tradition, and imposing climate and transgender agendas over the heads of the electorate, all without public scrutiny. The daily news brings us more and more instances of Britons being abused by the authorities for enjoying liberties we used to employ without sanction. We now live in a very different nation, that of the surveillance state. It is not only the political class and their henchmen in blue who are busy destroying ancient freedoms: the corporate oligarchy is also beavering away defunding YouTube sites, and “disappearing” Facebook pages, all with little or no warning.

We will start by condemning the fraudulent presentation of crime statistics by the authorities in most western nations. The Police are now under political and management pressure to minimise the numbers of incident reports that they record, thus reducing crime statistics and enhancing clear-up rates. Evidence to this effect comes from many quarters, and at the end of this section we quote from an experienced UK-based observer in support of our claims. Even with this systemic fiddle, the figures demonstrate startling increases in violent crime and the unwonted interference by the Police in our liberties and ancient rights, a danger to the fabric of our democracies.

We want to replace failed representative democracy with direct democracy. In so doing, we believe that the following objects will be attained. 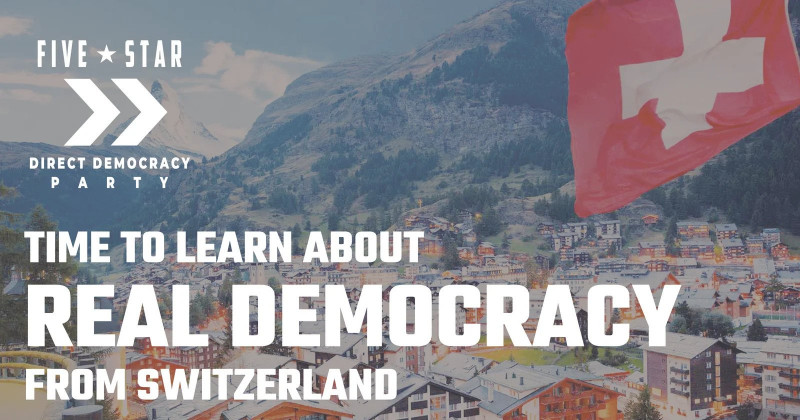 Can Switzerland Teach us a Lesson in Democracy?
February 2021

Countries have turned in on themselves during Covid-19. It is alarming the extent to which people now seem to fear their Governments and so many have been silenced into submission.